Wayne was headed home from work on my birthday, and I found a flight that I would land within a few hours of him right at Gatwick, so we thought, why not? Why not ‘run to London’ for a weekend? We had a little bit of site-seeing in mind, dinner and show (The Lion King) to officially celebrate my birthday and back home within four days. Well, I’ll be damned if the skies weren’t shut down

due to the Iceland volcano within 24 hours of us meeting at Gatwick.

At first we really paid no attention thinking that of course it will be cleared up within a day or two, surely they wouldn’t shut down all air traffic for that long? How could they – we’re talking London here. Well they did and they could, six full days to be precise. We were living in what will turn out to be an historic event; the longest UK airspace was shut down since WWII. Our original flight was cancelled, then the rebook was cancelled and eventually we made it home five days later than we planned.

We had two choices: 1) get angry, upset and demanding or 2) roll with the adventure. We chose to roll with the adventure because that’s why we are here anyways, isn’t it? And getting angry and upset doesn’t change a thing and only adds to the negative group consciousness. Plus, it takes hours away from happiness that I will never get back. (I did have a bit of a pout because the airline we were with was refusing all assistance but luckily Wayne was very easy-going about the whole situation and managed to pull me out of the foot stomping once or twice.)

It’s times like this I become crystal-clear-aware of how fortunate I am and how splendid my life truly has become.

We didn’t have a job we had to get back to in fear of losing wages, we didn’t have young children to fuss about, we didn’t have any pressing matters to attend to back in Spain, as well as we have the funds to shrug our shoulders and go with the flow. Plus, we had the wherewithal to both believe there was something we needed to understand and once that reason clears up, our flights will be un-blocked and we will move on.

London is so much more than little fancy pubs on every corner.   My favourite hobby, people watching, was in full glory in London. I would venture to say that London inhabitants are much more interesting than New Yorker’s. New Yorker’s tend to be more businesslike, trendy and uptight about it all. Londoners are much freer to be themselves. If you can’t find it in London, it simply does not exist.

I observed people in all different situations; the theatre district (we accidently walked into a gay pub that specialized in transvestites but that’s another blog completely), Convent Gardens, in a multi-cultural area, a business area, touristy area and a small town. Riding The Tube was an eye-opener in itself (unless it was packed solid) and I enjoyed the entertainment of different people along the way. 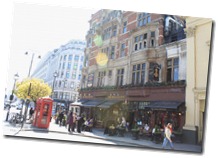 Wayne and I were the perfect team; it was so satisfying to sit at the corner pub window and he was happy to join me to simply observe the street life. I would order one large wine (250ml – there’s my 3 glasses per bottle theory) and he would order one beer, then another and we would be finished at the same time. Happy days!

I soon found myself judging people. I wasn’t comfortable with this as I don’t like to be judged myself. Judging brings down my vibe somewhat and has a negative feel. Reaching for another way to frame my observations, I happily arrived at my new motto, “That’s an interesting choice.”

Soon, everything was tagged with ‘That’s an interesting choice’ including their hairstyles, clothing, partners, newspaper headlines, people’s reactions to the air disruptions, hotel room decorations and so on. It wasn’t in judgement at all; it opened my mind and started me thinking about the choices people make and wondering why they make those choices. Soon I was turning it inwards, why was I making the choices I am making? Am I in self judgement or objectively making choices that bring me to my goal of happiness?

I originally thought the reason the universe is arranging for our stay a little longer in London was to make the trek to Stonehenge, a tour we put off because of our short trip this time. Once the week opened up to us, we jumped on the opportunity to take a special tour that allowed you to walk within the stones. Surely there is some deep mystical, life changing reason we must see this ancient site of megaliths.

Alas, as wonderful as the stones are (they have what we call the Mona Lisa syndrome – smaller than you think) and we are grateful for opportunity to walk among a wonder of the world, we both agreed nothing really stirred us, nothing shifted.

On the encouragement of one of Wayne’s colleagues, we bought tickets for ‘Blood Brothers’, the longest running show in London. I thought it was fabulous, by the time the play ended something definitely shifted within me and something was stirred. The premise of the show starts with a life changing choice – a single mother chooses to separate her newborn twins as she doesn’t believe she has the money to raise both of them. One is raised with her in poverty and one is raised by a very wealthy family. Now, the creators of the show may have had a completely different motive for writing the play (I think the message was regarding the class barriers in the UK but since I have no life reference to class difference, I made up my significance.) I was so attentive to the choices that were being made by the characters throughout the play. A very interesting observation of my viewpoint, I thought.

London eventually had a strong message for me, one that coincided with my birthday and will hopefully bond with me for the whole birth year until my next birthday and beyond. And that message is a strong reminder that I am in complete control of my choices. For instance, I can complain about my weight or I can make a choice to exercise daily and be aware of every bite that passes my lips. I can complain about being lonely or I can go out and meet people. I can choose to absorb everything around me or I can filter and make up my mind about what is happening. I can continue writing my book or I can complain I am bored. I can choose in every moment, in every instance. Wow – how’s that for a proper birthday present?

I always knew this, we all know this, but like most people we tend to beat the drum of what is; it seems on the surface to simply be easier. We complain that this isn’t perfect; I don’t have this or that; or they have all the luck and poor little me. We choose to smoke, drink too much, eat too much (or not enough), gossip, judge, buy too much, remain in a constant state of stress, and ignore our heart urgings and intuition. We prefer not to choose a different way; we close our eyes to the option that moves us towards what we truly want. And isn’t that an interesting choice?

All photos are my own and cannot be used without express written permission.

4 thoughts on “That’s an interesting choice”